This is a photograph that I have wanted to create for some time. I knew that there were piers for ferry services at Aust from the days before the Severn Bridge was built. Some of these relics date back to Roman times. 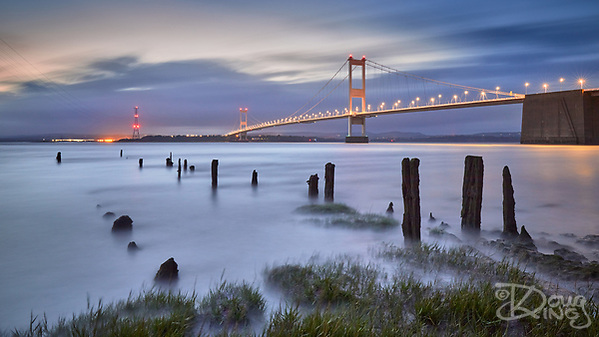 Well last week saw spring high tides peaking at around sunset which were the conditions I needed. However the weather was lousy which nearly spoiled my plans. In the end it took four trips down to Aust Cliffs to get the shot.

When I finally did get this magical combination of conditions, I only had one chance at the shot. It was so dark I was using three minute exposures. The tide in the River Severn has the second highest range in the world and this was a spring tide. The tide was rising so fast that I had to guess when to start my exposure as the water had not even reached the last post in line. By the time the exposure had finished the water was up around my wellies and I had to grab my tripod and retreat. Fortunately I nailed it and caught the water starting to run into the little gullies and runnels in the mudbank where I was standing.

That’s it. These conditions will not align again for a long time.

I hope it was worth it.

Click on the photo to buy it or to see others in the same gallery.

— Shining Severn — When I finally got the rig

[ Degrees of Separation ] A friend said I was mad

[ Ghost Crossing ] I have been thinking of this s

[ Tide Line ] It just goes to show, you should ne