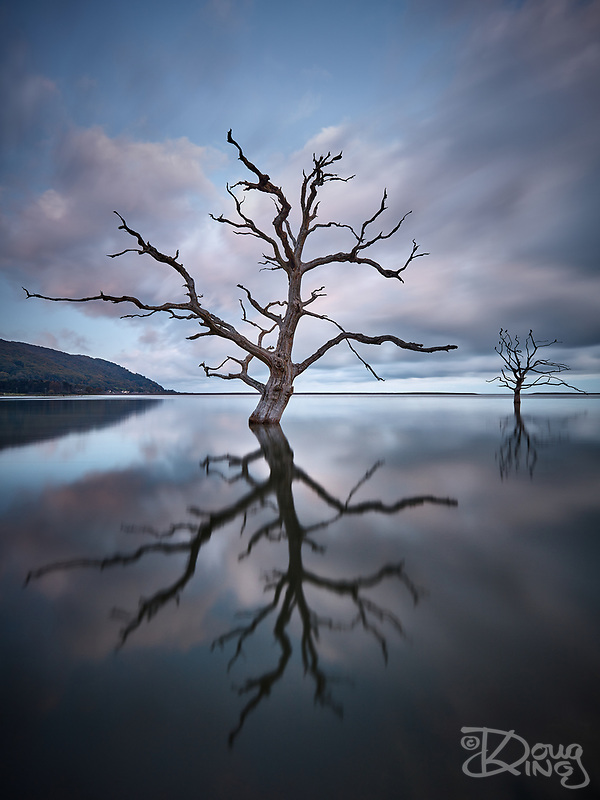 I have wanted to make this photograph since I first encountered this tree, nine years ago. Unfortunately many other things have gotten in the way in the meantime and, on the rare occasions that the conditions might have come together, I was unavailable to travel down to Exmoor. Anyway, this weekend looked like it was lining up to present me with the shot and I was free.

The salt marsh in Porlock Bay is a new and evolving piece of landscape. Originally farmland with freshwater marshes, this low lying area had been protected from the sea by an extensive, natural pebble bank. This bank was breached by a storm in 1996, inundating the land. The authorities decided to let nature takes its course and the site is now a SSSI allowing the study of the transition of habitats, as the salt poisoned the existing vegetation and salt tolerant species took over.

So, yesterday morning involved a very early start from Bath to get down to Porlock well before dawn. As I arrived on location I was surprised to find that, with nearly two hours to go until High Tide, the water was already rising over the ground. Well, I shouldn’t have been surprised, I had deliberately chosen one of the highest tides of the year in order to ensure an uncluttered foreground.

I found a convenient mound to stand on, hoping to stay above the water for as long as possible. The composition presents itself, so even in near total darkness I was able to frame the silhouettes of the trees. The race was now on, would my perch hold out, or would I have to escape the rising tide before getting my shot? Such is the nail-biting excitement of landscape photography!

The light arrived at almost the same moment that the tide rose above the last grass stalks, presenting an unbroken surface to the horizon. Perfection. Unfortunately the tide was running fast enough to ripple the surface and my exposure times were initially in minutes, so it was not possible to get sharp reflections. As the light came up I could capture shorter exposures, down to half a minute at the end. A couple of test exposures and then I got my shot.

All this time I had been carefully watching the water rise around my rapidly diminishing perch and, more importantly, behind me on my route back to dry land. By the time I got my shot the water was already over the toes of my boots. I quickly returned my camera to the safety of my bag, as I could see that I was going to want my tripod as a support for a tiptoe wade through deep water. Once again, I was so glad that I invested in a really good (and tall) pair of wellies. I was just in time to wade back to shore with dry feet, but literally on tiptoe with the water lapping at the top of my boots.

Another shot from the amazing sunrise on Westward

— Primeval — Sunrise colours over the sea in

— Anja Alongside — The Cypriot freighter Anja

— Point of Departure — The old jetty at Sudbr

— Azure and Gold — I managed a brief trip out