I was down in North Devon again in Mid October and took some time out to take photographs in Croyde Bay. My aim for the day was to try and capture the turbulent chaos where the break met the rocks at the edge of the bay. However, the outcome was something completely unexpected.

I had pinpointed a likely rock, set up my tripod, lens, filters, cable release and all the paraphernalia of landscape photography, to wait for the perfect wave. When it came, the wave was enormous and had me grabbing my tripod and scrambling for safety before my camera could be washed away! Whilst thus distracted, I was astonished to see a seal surfing in on the wave, right up into the rocky gully beside me. These gullies are deep between high rocks, and if I hadn’t been where I was, or if I had still been focussed on getting the shot, I would never have seen the seal. In fact, over the course of the half hour I spent getting to know this youngster, many people passed by, further up the beach, and remained blissfully unaware.

Fortunately I had a short telephoto zoom in my kit bag. Packing away the filters, tripod, etc was a scramble as I was afraid that I would miss a once in a lifetime opportunity. I dropped things, fell off a rock and made a fool of myself in my haste. Fortunately, only the seal was there to see. I needn’t have worried, the pup was far too interested in her surroundings, and eventually in me, to hurry off again. By remaining low, quiet and un-threatening I was able to observe her at relatively close quarters for about half an hour. She appeared almost as curious about me as I was about her. 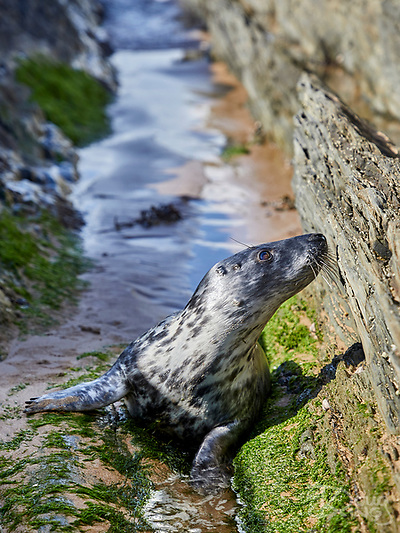 Thanks to the lovely people at the Cornwall Seal Group Research Trust, I now know a lot more about this seal’s likely story.

She is a moulted female pup, probably only 4-5 weeks old, a month at most, and therefore has recently weaned. Given that we met on the North Devon coast, she is likely to have been born to the Grey Seal colony on Lundy Island during August. Apparently, after weaning, seal mothers abandon their pups to fend for themselves. The moulted pups disperse in search of food and have to figure life out for themselves. For me, that explains both the pup’s curiosity about her surroundings, but also her tolerance and naivety to the presence of a human.

[ A Change of Direction ] After a year of photogr

Another shot from the amazing sunrise on Westward

— Primeval — Sunrise colours over the sea in

— Anja Alongside — The Cypriot freighter Anja

— Point of Departure — The old jetty at Sudbr